Siri is one of the more fun yet useful features of Apple's iPhone and even the iPad. Wikipedia says

"Siri is a personal assistant and knowledge navigator which works as an application for Apple Inc.'s iOS." 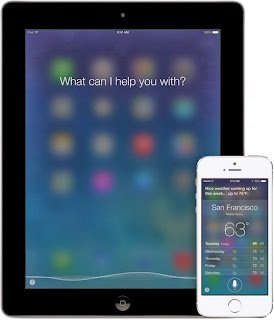 
NOTE: this works on the iPhone or an iPad that has GPS.


It's fun to show off Siri but it's not always easy to remember what to show. Here are a couple of easy examples of Sir's usefulness.

Siri is really, really good at showing off it's knowledge of sports scores. Ask Siri, "who won the latest [insert team name] game?" Siri shares some colorful commentary at times too.


Ask Siri "what is a good steak restaurant close by?"  Siri searches the web and lists a few places and might share  an unknown.

Sometimes Siri doesn't pronounce names correctly. If this is the case, say "that's not how you pronounce that." Siri will ask which work it pronounced wrong and you can teach it to say it right.


Now, if you want to have a little fun with Siri, ask her. Try a little "smack down" and ask Siri about Google Glass. To Siri, say "OK Glass" (this is how you begin talking to GoogleGlass, their upcoming head wear from Google) and listen to the response. Then epeat "OK Glass" a second, and third time. Siri gives you the same answer. But, when you ask a fourth time, Siri gets a little testy with her responses. Say "Google Glass" again and again.


Oh, and did you know you can now change the gender and country of origin for Siri? Go to the Settings app, General, then Siri. Feel free to change the Language or Voice Gender.


Oh, and if you are an Android person, try a Free siri type app there called "Andy".

Posted by Tablet Grandpa at 7:00 AM