Twitter is an app where you read what other people are writing. Other people write short sentences, only 144 characters long. You just read what is happening to people or what is on their minds. These are called "tweets."

First search out people you want to follow who are on Twitter. Some of my favorite people to follow are the comedian Steve Martin, some NASCAR drivers, Ryan Seacrest of American Idol fame, and Leonard Nimoy from Star Trek. Even Anderson Cooper is on Twitter. He's on twitter for CNN News and for his syndicated show called Anderson. You can follow many news reporters, TV personalities and movie stars.

Many local businesses have Twitter accounts and write posts that contain promotions or discount. Following these businesses might save you some cash.

To get started create a twitter account. Don't worry it's free. Twitter is very public. Anyone will be able to see what you write or see your name. However, if you don't write anything there's nothing for people to read about you.

If, or when you get tired of following someone, simply unfollow them from within the app.Twitter is available for all smartphones, tablets and there is a Twitter web page at https://twitter.com/. Twitter is completely FREE.

You can follow me by searching for Tablet Grandpa. Shown as @TabletGrandpa on Twitter.Here is a sample of a few tweets.

Above is an example of tweets seen on a smartphone.


Posted by Tablet Grandpa at 2:22 PM No comments:

Voice typing has matured and ready. Typing on a smartphone is difficult at best. The iPad has a much larger keyboard but still not a great typing experience. Why not use one of the coolest new features and speak what you want typed.

Touch the microphone icon near the lower left of the keyboard then begin speaking. Touch the microphone again to turn it off and watch the results. Punctuation is simply done by speaking the wod period, comma or exclamation point.I did this entire article by speaking into my iPad with only a small number of typed corrections.NOTE: The phone or iPad must be connected to the Internet for speech to text to work. 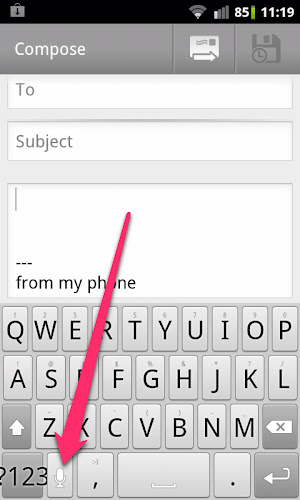 Posted with Blogsy
Posted by Tablet Grandpa at 11:46 AM No comments:

The iPad/iPhone User Guide seems to be a secret because virtually everyone I speak to these days didm't remember seeing one when they opened the box.

Note: this a repeat from an earlier post but appears worth repeating.

Yes, Apple makes great products and their User Guides for those products are well written. However, did you find it in the box? Most consumer electronics don't have much of a paper user guide these days because they take up paper and cost. They typically include the guide on a CD or some electronic form. Apple is no different.

The iPad/iPhone Users Guides are found as a Favorite in Safari, Apple's internet browser. Go to Safari, select Bookmarks and go to the very bottom. The User Guide is well written (no techno speak), well illustrated and easy to read (large font and clear pictures). 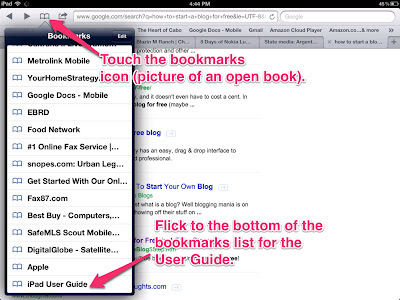 You can also get the iPad/iPhone User Guides from iTunes. Choose Help (far right on the menu bar) and select your desired User Guide. Clicking the user guide link will open a PDF of the User Guide for safe keeping or printing as you desire.

Apple has terrific User Guides but not easily found. 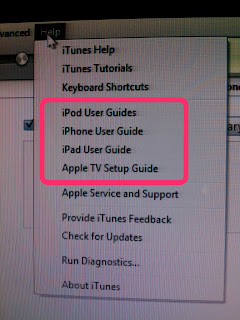 Posted with Blogsy
Posted by Tablet Grandpa at 5:10 PM No comments: